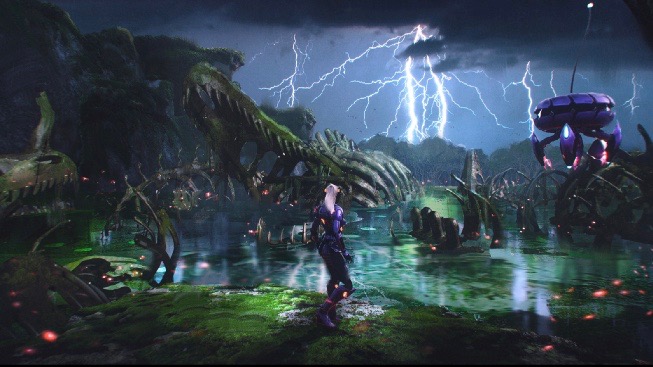 Scoriox and Nijafe YouTubers spill the beans about their private Illuvium beta test. Both YouTubers have been beta testing Illiuvium’s survival mode which is Illuvial monster combat and strategy gameplay. They are both in an exclusive Illuvium private beta testing group.

Here’s an interview where Scoriox and Nijafe are asked about their Illuvium beta testing experiences. Everything from first impressions to hardware limitations, areas of improvement, strategies, and tips for the land sale, if they still feel the same way about Illivium after beta testing it, and more.

This is some good stuff. You don’t want to miss it!

Illuvium Digital Land, eh? What’s It Good for? According to YouTubers Scoriox and Nijafe It Plays a Potentially Endless Stream of Substantial Revenue…

Founded in 2020 by Sydney by Warwick brothers Kieran, Grant, and Aaron, Illuvium is one of the crypto sphere’s most hyped and most promising GameFi projects. And next week is a hugely significant one in its short-ish history, as it’s opening its land sale to the public – from June 2 to June 5, 2022.

We’ve covered it here in Coinhead before, but briefly, Illuvium is a collectible (think Pokémon), sci-fi-themed NFT game, and auto-battler mash-up that also features RPG and city/land-building elements – all powered by an intricate GameFi revenue-distribution and token economy.

It’s the land element that’s on most Illuvium fans/investors’ minds at the moment. And as simply as we can explain it, the land manifests as sci-fi industrial-complex plots that generate fuel, which plays an important role in the game’s economy.

Fuel can be used either as a relatively passive source of revenue income for those who don’t plan to play the full game or can be used to bolster gameplay and potentially earn more through playing more elements of Illuvium.

This succinct video explains it all much better…

While the following Q&A will also clue you in on it all a bit more, from two guys who spend a lot of time digging into the project…

This week, we talked about all things Illuvium with two independent YouTube content makers – Melbourne’s Scoriox and Nijafe_Plays from Massachusetts, USA.

They’ve both been checking out the game’s “Survival” mode (Illuvial monster combat and strategy gameplay) in an exclusive Illuvium “private beta” testing group.

Understanding they’re both Illuvium investors already, we asked them a bit about the beta play, as well as what they’re hoping to get from the land sale…

Hi both. How’s the Illuvium private beta been going for you so far? First impressions?

Scoriox: I absolutely love it – super fun and very engaging and challenging. I always had the belief it would be set apart from other games in a similar genre and it has still blown my expectations out of the water.

Nijafe: It’s actually a little harder for me to answer this one. And that’s because my computer is not strong enough to enjoy the full experience. I’m hoping for a version of the game that’s optimized for weaker computers.

Okay, bearing in mind hardware limitations, can you identify the best parts of the gameplay you’ve been able to enjoy?

N: What I do like is that there are so many different ways to approach a match, and also that there’s no best way to play, which gives makes for a good challenge.

S: Yeah, the challenge is real, and that’s always my sort of game-high skill ceilings and not too difficult to pick up and play. And I also think the cinematic battle experience is one of the best parts of the game as well as the engaging strategy gameplay that you need to learn and improve at in order to get to the higher waves and higher up the leaderboard.

Are there any areas where you think it might need some improvement?

N: For the private beta, I think it would be nice if a few more Illuvials (the NFT monster characters) were introduced in to keep up the hype.

S: Yeah, I think the limited array of Illuvials and limited game mode system definitely leaves you wanting a bit more. A game like this is designed to be highly replayable but until there are more options – customization or PVP – it does lose an element of that replayability. It can start to become a little bit repetitive for these reasons, in a way that battling against a unique opponent or choosing your own deck would remedy very quickly. This is just a testing phase, though.

Has playing the beta reinforced your already strong belief in Illuvium?

S: Definitely. The game plays excellently, I already know certain bugs have been fixed for later release and the cinematic battles play out even better than I expected. It also isn’t boring – this is a hard one to describe but with TFT [Teamfight Tactics, a popular mainstream gaming auto battler] it’s very passive, you play your pieces and watch the battles.

With Illuvium, there’s always a better move you could play and you can mess around with your positioning for a long time on every wave because there’s always something you missed and can improve.

N: Honestly I didn’t need the private beta to be a full believer in the game, but it’s definitely cool to be able to play something.

The Illuvium land sale is coming up very shortly. Tell us why you think it’s a good opportunity to own some?

N: If you believe in the long-term success of Illuvium, I think it’s important to diversify into all aspects of the ecosystem. I really like the idea that I’ll have something to play on my phone when I’m not at my computer.

S: I think the bullish sentiment on Illuvium land is simple. There will only actually be 100k lands, but there are an infinite amount of possibilities for future Illuvium games and land utility. So that way, the amount of land stays scarce and its usefulness and profitability only increase as things evolve and grow.

What are your strategies or tips for the land sale – it’s a Dutch auction process, right?

N: Yep, Dutch auction-style, and my advice on that is simple – decide how much you are willing to spend before the land sale starts, if it doesn’t hit those numbers don’t FOMO in.

S: Yeah, my strategy is also to not FOMO in at a max price, and aim for about 50 mins+ time elapse on any given land batch. I will essentially be going for whatever drops the lowest in terms of percentage of the initial starting price.

The way we understand things is that the land sale is divided up into different tiers of value (T1-T5). The pricier the land, the more revenue owners will be able to extract, with T1 being the least expensive. What sort of land are you hoping to obtain and why?

S: I’m hoping to get a T2 minimum, but if I have the opportunity and funds by some miracle, I definitely want a T3. If I don’t have the funds, I’m still hoping for a T2 and T1 or multiple T1s. I really enjoy these sorts of city builder games so I am more than happy to play multiple plots at once myself.

[Note, a T2 batch of land could end up costing upwards of US$3,500, paid with the Illuvium-ecosystem currency sILV2.]

N: I’m also hoping for a T2. I think T1 will be very popular but I think you’ll get the best bang for your buck in T2 through T4. That said, T3 and T4 are way out of budget for me.

Crypto games in the bear market… do you think there’s a danger the GameFi/NFT narrative weakens considerably during this time?

N: As far as the bear market’s concerned, I just think this is the best time to do the research, find great projects, and double down on them. We’re just coiling up right now, and when the crypto market goes back up, I think we’ll slingshot to the moon – ha!

And what about you, Scoriox? Last time we spoke, you said you thought Illuvium will be one project that crushes it in the bear? Do you still feel that way?

I still believe that yeah. A big thing to note is the Illuvium team has a good two to three years of financial runway still. Many projects that died in the bear market hadn’t planned or considered market downturn when building but Illuvium is set up to continue.

Then, all that needs to happen is Illuvium needs to be a good game and I can already see that it is. We haven’t actually seen how GameFi operates in bear markets yet. Traditionally, video games are unaffected by market fluctuations but even modern video games have only existed within a secular bull market in traditional stocks.

Only time will tell, but as far as tokenomics go Illuvium has some excellent systems that will help prevent the dumping of the token.