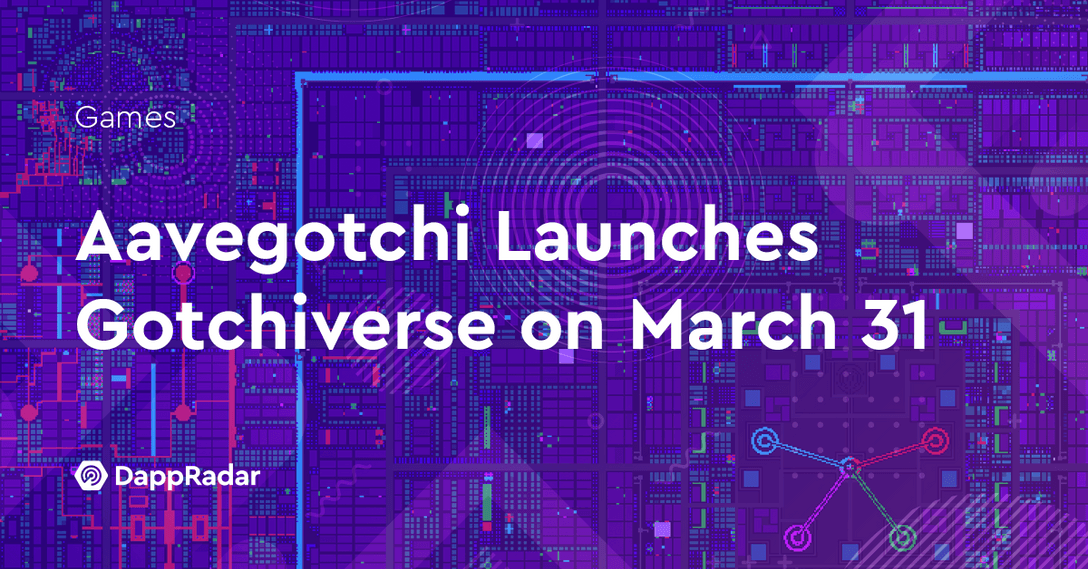 The Aavegotchi team has announced a release date for the much anticipated Gotchiverse virtual world. The official launch of the 3D virtual gaming space will take palace on March 31st. With the launch of Gotchiverse, Aavegotchi collectors will get even more play-to-earn opportunities. Most importantly, this will be a shared virtual space for all Gotchi fans.

According to the official announcement, the new platform will bring new Aavegotchi gameplay and numerous interactive avenues for players to communicate with each other. What is more, the Gothciverse will give yet another use case for Aavegotchi NFTs, which will become playable characters in the virtual environment.

Impressively, the Gotchiverse virtual world takes on an important goal. According to Jesse Johnson, COO of Pixelcraft, the game studio creating Gotchiverse, the platform revolutionizes the online gaming sector.

The revolutionary factor in the way Gotchiverse works comes from simultaneously showing the same environment to all players. While traditionally, virtual worlds rely on showing each player a copy of the environment to avoid unnecessary strain on the network, Gotchiverse will circumvent this practice.

Instead, the platform will be supported by hundreds of servers worldwide, so that all players who enter Gothciverse are actually shown the same version of the game. Importantly, this structure will support the gameplay in Gotchiverse.

One of the game modes in the new virtual world will resemble a Pac-man type of map, allowing players to collect Aavegotchi NFT resources along the way. Simultaneous play will ensure no disputes over which player “caught” an item first. This technology will also offer the ultimate environment for the Aavegotchi community to engage with each other in the same space.

Land in the Gotchiverse

In true metaverse fashion, the Gotchiverse virtual world would not have been complete without the prospect of owning land. Alongside the completely new gameplay, Aavegtochi is introducing a set of four new resources. FUD, FOMO, ALPHA, and KEK will be gathered throughout gameplay and used to decorate and customize land plots in the Gotchiverse.

Additionally, these resources will allow players to craft useful in-game tools, further boosting their performance in the Gotchiverse. For the moment, there is no more information regarding the land-owning aspect of the Aavegotchi virtual world. However, as March 31st approaches fast, the team will be releasing more details about the platform.

DappRadar will continue monitoring Aavegotchi as the community buzzes with anticipation to start exploring the Gotchiverse. Check out the useful links below to prepare yourself and learn more about Aavegotchi. Additionally, you can follow DappRadar on Twitter to learn the latest Aavegotchi news first.

Keep reading to learn more about the Aavegotchi Gotchiverse, a Tamagotchi like 3D virtual game.

Aavegotchi, the playable characters loaded with Aave’s interest-bearing tokens, are getting their own little gaming universe. The Gotchiverse will launch on March 31, 2022.

As we mentioned, Aavegotchi are NFTs that work now somewhat like Tamagotchis of the late ’90s and somewhat like digital piggy banks. Owners have to care for them so they grow and also so they don’t decay. But the Gotchiverse is the next phase of these characters’ evolution. It’s a 3D space where the characters can move around, meet each other, gather fresh tokens, make stuff, and eventually battle against invaders.

With this new virtual world, Aavegotchi makes the transition to a complete play-to-earn game, where players have strong incentives to play a lot and gather up in-game assets that correspond to ERC-20 tokens which will presumably have real-world value.

It will also be a way of making the community of Aavegotchi owners even more real by giving them real-time ways to interact beyond Aavegotchi Discord and Aavegotchi Twitter. In fact, the team behind the game is attempting to break new ground on just that point.

The Defiant talked about the launch with Jesse Johnson, the chief operating officer of Pixelcraft Studios, the company that works for the AavegotchiDAO and has built the game up to this point.

“We are basically taking on a very ambitious job here,” Johnson said. “We are experimenting with everyone in the same world on the same instance.”

To translate for non-gamers: there are a lot of games out there where players play in a virtual world and can interact with each other, but those worlds tend to be copies of each other. Networks aren’t fast enough or powerful enough that every player in the same online place can see every other player at the same time.

Aavegotchi, Johnson said, is working to solve that problem so that every player will be able to interact with anyone else in the same spot.

“We have servers all around the world and we have to sync them,” he said.

There are a few ways the Gotchiverse can be played, but one of them is a Pac-Man reminiscent style race to pick up valuable stuff that’s lying around. That stuff corresponds to real ERC-20 assets, so it’s really important that if one Aavegotchi beats another to a particular asset, there’s no confusion about who got it for players.

“I think other teams and other projects will definitely benefit from the stuff we’re trying to pioneer here,” Johnson said.

The Gotchiverse will release four new in-game assets into the world, known collectively as Alchemica. The four assets are called FUD, FOMO, ALPHA and KEK, listed from the rarest to the least rare. These will all correspond to real tokens that can be used on Ethereum or Polygon (Aavegotchi mostly runs on Polygon, due to scaling issues on Ethereum’s mainnet).

Another level of the game will be to own territory in the gamer and steward it well, using those in-game assets to craft or buy useful tools for managing the land.

When crafting occurs, the tokens spent largely get recycled back into the larger Gotchiverse economy (including paying Pixelcraft and the AavegotchiDAO), though 5% get burned).

This resource management game, Johnson said, will probably be the one with the most depth for people who really enjoy gaming, at least early on.

A final level of the game will be social, where players mobilize each other to entice the game to rain down assets. The more Aavegotchi get mobilized at once in one of these rituals, the bigger the rewards will be.

This was really devised with gaming guilds in mind. It’s a way they can all band together and have an experience where the whole is greater than the sum of its parts.

Beyond that, the Gotchiverse can also be used as a general-purpose metaverse, Johnson said, like Second Life or CryptoVoxels, where players can just hang out and interact with each other.

Here in the early days, the game is going to be very mellow and safe for players. It all starts in what’s called The Citadel, which is an Aavegotchi only zone (somewhat reminiscent of the high-security Empire regions in EVE Online). When the lands outside The Citadel open up, there will be more bountiful territory on which to harvest tokens, but there will also be dangers out there.

An enemy of the Aavegotchi, Lickquidators, roam on the outer lands. In fact, players will be able to participate as the arch-enemy, who can be seen at the end of the trailer.

Original articles can be seen here: //dappradar.com/blog/aavegotchi-launches-gotchiverse-on-march-31 and here: //thedefiant.io/exclusive-aavegotchi-poised-to-morph-into-play-to-earn-game/